If you’re here to figure out the best strategy to be greenlit, let me squash your hopes before we get started. I don’t fully understand how we got Greenlit. I have only guesses and hypotheses on the subject, so take this blog post with a grain of salt.

With that short disclaimer done for, let’s take a look at what we did to get our game, Subaeria, an AI manipulation roguelike, greenlit!

For those curious about it, here’s our page: http://steamcommunity.com/sharedfiles/filedetails/?id=442657331

First of all, before even launching the Greenlight campaign we assembled a small following in a Facebook group, nothing massive just the few people we’ve met at various events (PAX East, local events etc) as well as friends and family. We were about 50 on that group. Once we launched the campaign, we had everyone push the news at the same time, so that we would hopefully start to trend.

In designing the page itself, we spent a while determining what should and shouldn’t go in there. I knew I wanted to include a very short description so people could get the gist of the game straight away and then keep on reading if they had an interest in Subaeria. I also included a feature list that would be an at a glance look at the game.
I initially added descriptions for the 4 playable characters and the different environments, but I felt like that was way too lengthy, and opted to link to our website instead. That way people who really want to learn more can go there to get more info. Less is more on these occasions. You should take what you want to talk about and cut it down to its essence. Pick one thing about the game that HAS to be in there and put it in. Tease the rest with the feature list and add a link to your site if they want to learn more.

We also added playful headers with animated gifs of our main enemies to create some visual interest and not have a plain text page, that just isn’t enticing to read.

Our trailer was short and sweet, nothing fancy. It didn’t feature any motion graphics or voice over and was focused on showing two things: The gameplay and the look of the game. I think it did both of those very well, and the general feedback was positive. The look of the game was, I believe instrumental in getting that Greenlight. It’s our number one source of comments and praise. The look of the game is really distinctive and bright, so that definitely caught people’s attention.

As most of you have probably heard, the first few days of a Greenlight campaign are the most important. This is when the vast majority of traffic came our way. We also reached out to press and anyone we could think of during that time.

When we launched the Greenlight we had a steady stream of votes coming in. I would refresh the page ravenously for the first two days, and every time there’d be new votes. We kept to about a 50/50 divide between yes and no votes throughout the campaign, with the majority always being on the “Yes” side. I think that had a fairly big impact on us getting Greenlit, as what I’ve mainly seen are games having a 30/70 breakdown between Yes and No votes. We also had quite a bit of comments, the vast majority of them positive ( We just had two or three out of the eighty be negative)

We got very limited press coverage of Subaeria, I reached out to many outlets but didn’t get too much of a response (Such is the PR game), the little that we did get had a tiny impact on our Greenlight numbers (We’re talking less than 10 people on our page, for all press combined).

What did get us a lot of traffic though, was of course, Steam itself. 80% of our voters came directly from Steam by browsing through Greenlight. Our second traffic heavy hitter was Facebook. That’s where the vast majority of our community is housed and where we put most of our efforts. 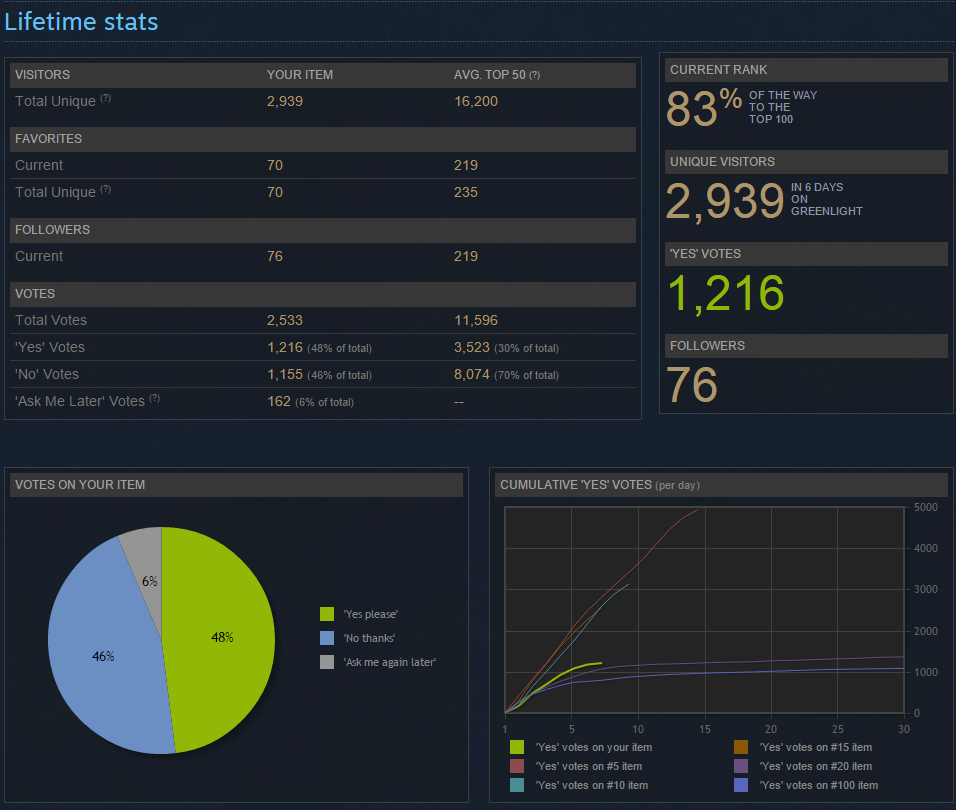 Contrary to the popular “rule” we weren’t in the top 100 before being accepted. You can see in this screenshot we were sitting at 83% of the way up. Our hour of glory where every time I refreshed the page we had 10 more votes, was over and we were slowly stagnating. Then the next morning, we received an email: Congratulations, Subaeria has been Greenlit! 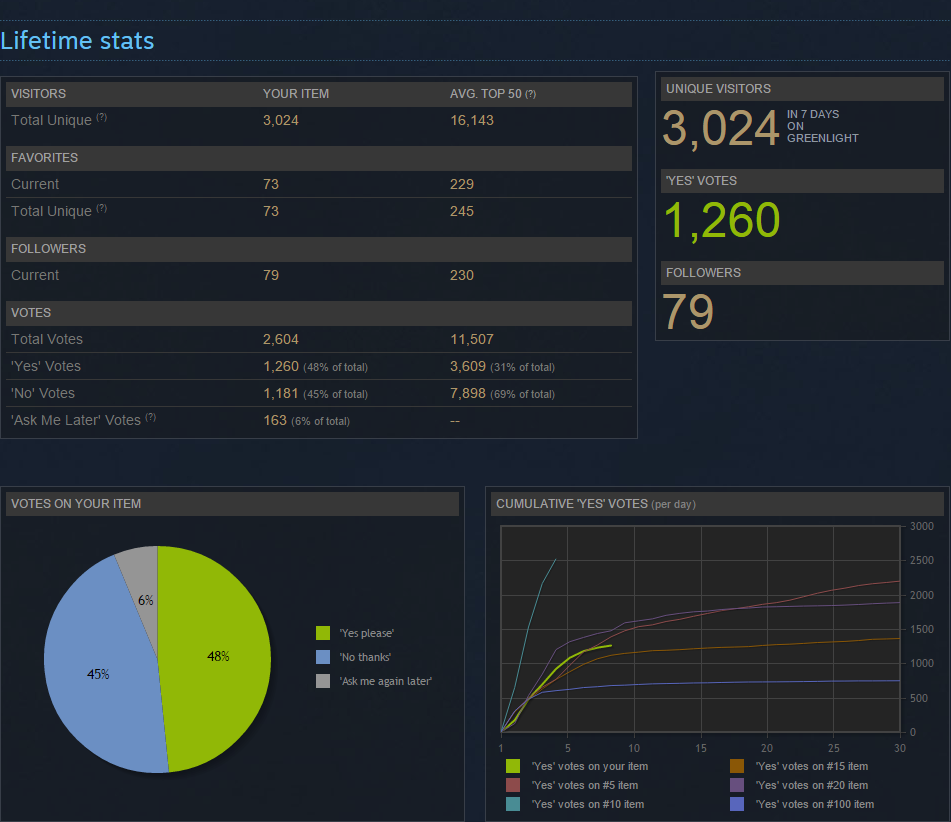 I have a couple of hypotheses on what gave us the Greenlight so fast and with comparatively so little votes:
– The look and level of polish of the game, which compared to some other titles on greenlight is pretty nice.
– Our positive Yes/No vote ratio
– The enthusiasm in the comments.
– The fact that we’ve shipped games before and are very close to completion of Subaeria (This is the one I’m least sure about, but I feel like it’s definitely not impossible that it was considered)