In my previous post I explored how I approached level art at a high level. This time, I’ll explain the method that I use to decorate one room in Subaeria.

The structure of a room in Subaeria relies on 2 key elements: The player’s paths and the robots’ paths. What I call the player’s paths are the main paths that he can follow to progress through the room (Go from one exit to another, move to a strategic position to solve the puzzle…). The robots’ paths represent the patrol routes and axis that the player can use to destroy the robots. These different paths represent the structure of each room, and it’s what I try to highlight through level art. To do that, I use the lighting to encircle the important zones and I clearly position each object so that their visual aspect (shape, silhouette, texture) can showcase the direction of the paths. 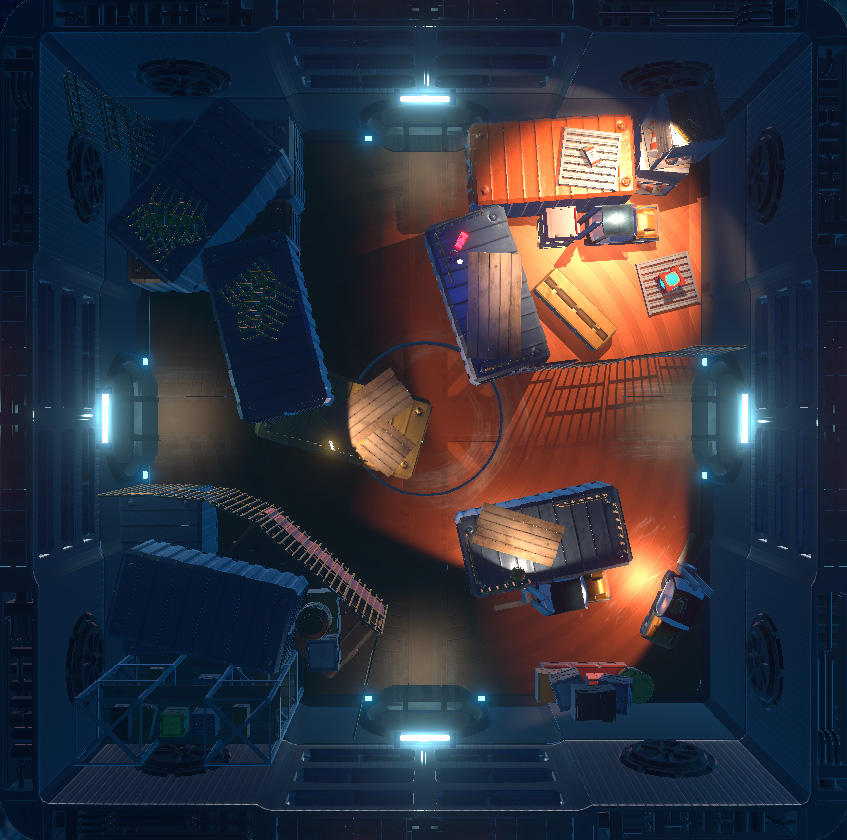 For example, the objective to reach in the room above, a new skill in this case, is located behind fences and containers on the top right. I made it obvious by shining the room’s main light directly on it as well as placing an orange container -the only one in the room-  next to it. This light is placed in a way that makes the shadows radiate and create lines that concentrate on the goal: the skill. The fences are particularly interesting for this kind of effect because of their rich shadows. I also leaned on the general structure of the room to draw out waves (the orange zones in the image below) that wrap around the bright zone. 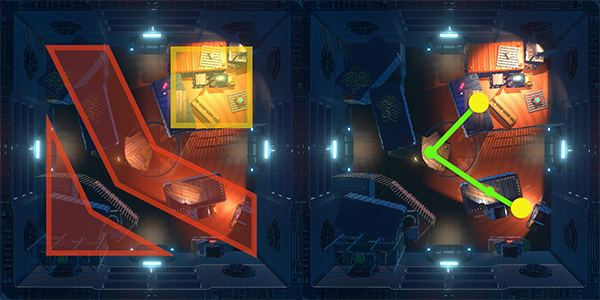 I highlighted the path to get to the objective by a line of lights – with the strongest shining on the entrance to the path- showing which containers to use. The angle of the shadows on the containers left by little projectors as well as the direction of the boards also help highlight the path to the objective. By placing the lights on the containers I discovered a bit by coincidence that the shadow of the character acted like a needle, pointing the direction of the next container on the path. I anticipate that few players will notice it, but I’m still happy when I find something like this.

As you can see, highlighting the different paths in a room requires a delicate mix between lighting and how the objects are placed. Each room is a new challenge. I always have to find new tricks to show off the particularities of each room and try to give them a unique identity.

For my next blog post, I’m cooking you a little surprise to give you an even closer look at each of the actions I take to decorate a room within Subaeria.